The new and exciting entrant in YA fiction, the author Finn Longman, brought one of their most intricate pieces of crime riddling thriller to Bexley Grammar school on Monday 31st January. They discussed with their audience of eager English Language students the journeys of finally being a published writer after 12 years of writing drafts from their teenage years and how they found different writing styles and genres. Trying to relocate peace in the chambers of writing and reinvent the modern crime genre, their mission is to get rid of the typical “attractive female protagonist romance” stigma that has suddenly plagued all modern authors to write about to make the book “sellable” and market it better to younger audiences. They say that this book, as well as an attempt at removing said stigma, was also a way of expressing their feelings towards certain bits of injustice in society, although they have mentioned that some things which are in the book were intentional, and others not so much.

Finn also talked to us about how they approach world-building in writing and the way they found the made-up language of Esperanto as well as it being a driving factor for the town’s name and the language the characters spoke in the book. Finally, Finn gave us a very early taste of the book “The Butterfly 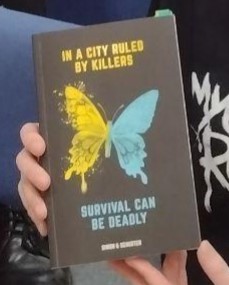 Assassin” (codenamed the Dark Butterfly in its early stages).  The book is about a secret assassin programme for minors in which the protagonist, Isabel Ryans, has been part of since a little girl. Living in the fictional city of Espera, a top-secret ammunition site built after WW2, the two rival organisations which control the city are being attracted by this unaffiliated killer who is cold-bloodedly roaming the streets and wanting to recruit her into their organisation. Despite this, Isabel wants to live a normal life but after running away from home she meets a new friend which for the first time in ages gives her hope. Will the blood on her hands cost her everything? You can find out when the book will gracefully land on the 26th of May 2022 and is available for pre-order on most book-selling platforms.

Before departing, I want to thank Mrs Quinton for arranging this opportunity for the English department. ‘Till next time!