Following our study of Haruki Murakami's short story collection, The Elephant Vanishes, in our HL English class, I recommended that students should read an interview with Murakami and Mieko Kawakami in which she questions his representation of his female characters. In response to the interview and her own reading, Alison Balint reflects on his work from a feminist perspective in this thought provoking article. 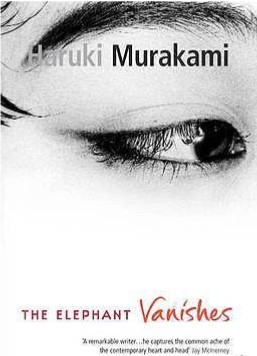 In an interview with Mieko Kawakami,  celebrated Japanese author  Haruki Murakami  discusses the feminist critiques of his work, which are often considered to objectify women. There are numerous interpretations of Murakami's work that view his portrayal of women as overtly sexual and not full characters, but rather as mere catalysts for the progression of the (usually) male character.

I think what's most striking about Murakami's responses is his unwillingness/ inability to recognise the social context of his objectification of women. While he may not necessarily intend to portray women in a purely sexual/ non-sentient way, that is a very common interpretation/ impact of his work, and yet he continues to assert the fact that he merely portrays his characters as human beings, who happen to be male or female.

I definitely am a bit more unsure of where I stand on a feminist interpretation of Murakami's work, due to the fact that he seems to harbour an apathy towards his inadvertent display of traditional gender roles. But this perceived 'apathy' may be a positive thing, in the sense that he simply chooses to write what he wants and feels is true, not beholden to the pressures of political correctness. From my own inherently Western and feminist perspective/bias, the concept of valuing a lack/ unawareness of political correctness feels very foreign, but perhaps there is more to be gained when accepting that there is no way to justify a text making me feel uncomfortable. A freedom, perhaps, that we have erased from our liberal society: discomfort.

Speaking about his characters, Murakami states that 'on a fundamental level, before I see them as a man or woman, I see them as a human being', but I think that personally, I would be unable to not consider a person's gender, due to how deeply my gender has impacted my life and personal experiences. The idea that we can divorce a person of something so defining as gender seems almost dehumanising and reckless to me, on a personal level. It would be as if I were disregarding someone's very essence. And yet, Murakami challenges what defines an individual, and how an individual chooses to make sense of the world around them. I think that because we are so rarely confronted with texts that challenge our perception so deeply, there is the possibility for an immediate disconnect with Murakami's work, but instead, we react very emotionally, be it positively, negatively, or somewhere in between.

Due to the lack of continuous action or events, Murakami's stories may initially appear simplistic, but there is always a feeling of something beneath the surface that we just haven't grasped yet. And Murakami's refusal to explain, or even explore his characters seems fundamentally autonomous, as if he is flagrantly disregarding an established social convention. In our society, we constantly demand explanations and purpose, and through his withholding of this, Murakami not only shocks, but provides us with the rare opportunity to form intensely personal interpretations.

What a great read!