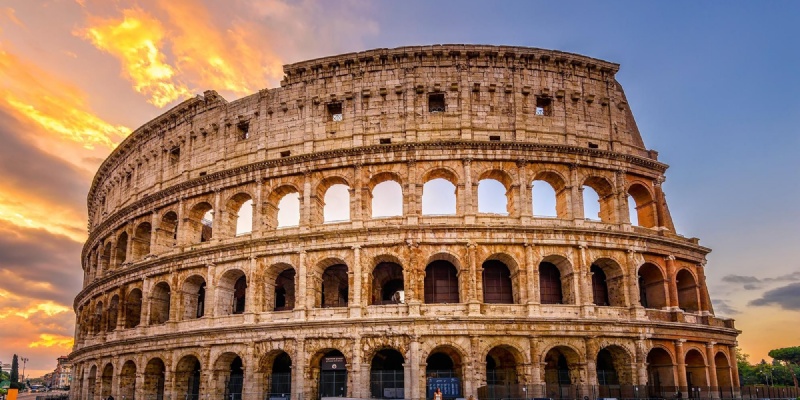 In February, other students and I went to Rome with the Classics Department. We set out at the crack of dawn on Valentine’s Day, and by midday we had arrived in Italy, where we were greeted by blue skies and the need for sunscreen.

From the airport, we drove to Ostia Antica, an ancient site that had once been Rome’s main port along the River Tiber which now lies three miles from the shore. It was founded by Marcus Ancius, the fourth of the legendary kings of Rome, and had been a very diverse meeting place of many cultures as a central meeting place of trade, with both Latin and Greek inscriptions found throughout the site. We wandered around the ruins, finding mosaics advertising what had been sold at the market, wine bars and a theatre, as well as lots of stray cats which we attempted to befriend!

We started the next day by visiting the Flavian Amphitheatre,  which had been designed to please crowds with its gory gladiatorial contests and fights against wild beasts. Built by emperors of the Flavian dynasty, the Colosseum is thought to have gained its name during the Middle Ages due to the Colossus statue of Nero that was erected nearby. It was built between 72-80 BC; it would have seated 50,000 people, and inside we luckily got to see an exhibition on Carthage.

The Palatine Hill was where Romulus had famously argued with his twin Remus over the positioning of  their new city, and was where many emperors of Rome had once resided. From it, we could see the Roman Forum in its entirety, and our teachers had many interesting stories about famous events that had occurred there, such as the stabbing of Virginia. We also got to see Caesar’s tomb, where people still leave flowers.

On the third day, we visited Hadrian’s Villa, which the emperor had built as a retreat from the hustle and bustle of Rome. Hadrian had ruled from 117-138 AD, and was incredibly well-travelled, spending most of his years as emperor exploring outside of Rome. Because of this, much of the architecture and design of the villa was inspired by other countries. For example, replicas of the Caryatids on the Athenian Acropolis can be seen by a secluded lake, as well as a statue of an Egyptian alligator.

After our visit to Hadrian’s villa, we went to the Roman National Museum, where we saw lots of intricate sculptures and armour, a highlight being the walls of Livia’s room.

Our final day in Rome was spent walking through the city. We visited Vatican City which was full of people, but sadly we didn’t catch a glimpse of Papa Francesco. However, we did find a multitude of things to buy: rosaries, Pope calendars and holy water. We then walked by the River Tiber and visited the Pantheon, which had been built by Marcus Agrippa during the reign of Augustus and was completed by Hadrian, where the famous Renaissance artist Raphael was buried.

At the Piazza Navona we had an underground tour of the Stadium of Domitian that once held athletic contests. Our day concluded with a look at the Ara Pacis, as well as Trajan’s column.

We ended the trip with a quiz night where some history and very specific Disney knowledge was put to the test, as well as a talent show featuring a heart-wrenching retelling of Romeo and Juliet, a great musical number, and incredibly realistic performances of Livy and Homer’s tales.

Thank you very much Mr Risdon, Ms Fisher and Ms Pearson for your interesting facts and anecdotes about the ancient world, and for being so patient with us!