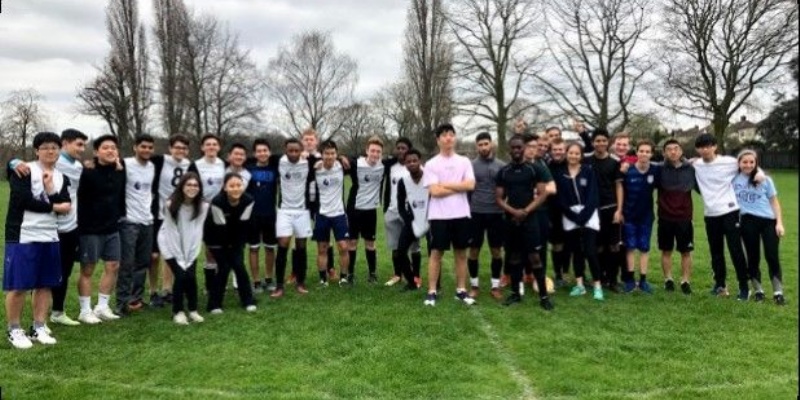 Last Wednesday the 20th March we had a visit from 40 students from Bergen Country Academies, one of the top IB schools in the USA.

Their students were paired with some of our Year 12 and 13 students and they shadowed their buddy throughout the day. They attended lessons and delivered an assembly to our Year 12 students.

At the end of the day students participated in an international football friendly which ended in an honourable 3-3 draw.

While we are used to visitors from overseas in school this is the first time we have hosted a group who are following exactly the same curriculum. It was fascinating to talk about our shared experiences of the Extended Essay, ToK and CAS. All the American students studied Economics so the students who came to my classes were able to join in and contribute to discussions. (Unfortunately, they weren't able to shed any more light on the logic of Donald Trump's economic policies).

I know that everyone involved thoroughly enjoyed the experience of meeting new people. Our schools were well matched and students had a lot in common with each other. I am sure that many of the students will keep in touch with their new found international friends.

Last week some of us in the Sixth Form had the opportunity to meet a group of American students from an IB school in New Jersey. The goal of the visit was to learn more about how we study the IB differently and I learnt a lot over the course of the day.

In my English lesson my partner and I had a really interesting discussion about Literature. It was strange to think that for Mei, studying Shakespeare was international reading and it was fascinating to compare the ways in which we study Literature. We were able to debate some American books that I had read (for example The Catcher in the Rye) and it was great to hear her perspective on them as she was able to provide me with more social and historical context. Our conversation then progressed onto the Extended Essay - both of us are intending on basing our essays on Literature so I was eager to hear her approach to the topic. Mei had chosen to base her EE on the very current issue of gun laws, linking this to modern poetry, which was an idea I would never have thought about.

All in all, the day made for some really interesting conversations. Furthermore, the fact that we are all studying for the same qualification made it surprisingly easy to connect with someone I perhaps wouldn’t have had anything in common with otherwise. It can be easy to forget the international scale of the IB and I had never considered the connection, it would give me with other students around the world. Our day together was very enjoyable and proved interesting for both of us.

Having the American students visit was really eye-opening. Though they came from an IB school, there were many differences in their education system. The fact that a lot of them took IB courses, but not the diploma was interesting to me, considering their academic knowledge was surprisingly similar to ours.

The students themselves were very outgoing (in typical American fashion) and were great to engage with socially. Their street lingo confused me at times, but we gave each other lessons in London and New Jersey slang which was of course educational. After having gone out for lunch with them and being told that American KFC is superior, it felt like we had known them for weeks. It was definitely a great experience and I hope to take part in something like this again!

From my experience the American school visit was not only exciting on their behalf, but full of enlightenment and unexpected surprise for me. Wednesday is one of my longer days and it was great to share my classes with someone who not only shares them on another continent, but was also interesting.

Granted, some, such as my English class were slightly hard for them to contribute to (because we are working on essays for coursework) but classes such as ToK, Politics and Economics were easy to integrate into.

My American partner (Emily) was able to join in the discussion on humanitarian aid where the American influence, with all the logistics, in Libya and Afghanistan was discussed. In addition to this, we were able to understand how they are taught the syllabus, i.e. the order of topics as we (at Bexley Grammar) have a unique way of splitting classes between higher and standard level.

The mix of subjects between the American system with AP classes and IB was particularly interesting, for example, Maths - Emily shared standard Maths with me, although she is currently doing AP classes in Maths and plans to take IB classes next year in the Senior Year (Year 13). What is also shocking is the similarities between both schools, as in the clubs available and the stresses on the same things, like the presentation and drama skills in English… :)

On a whole it was an amazing experience for me to have a real insight into the differences in the Global IB Course and how it is taught. What makes it even better is that I now have a friend in New Jersey that I’m sure to keep in touch with.

It was really fun to spend the day with my American partner, we got along really well and it was extremely interesting to learn about what life living in NYC is like (as well as learning about their IB experiences of course).