Operating Live in the BGS Theatre 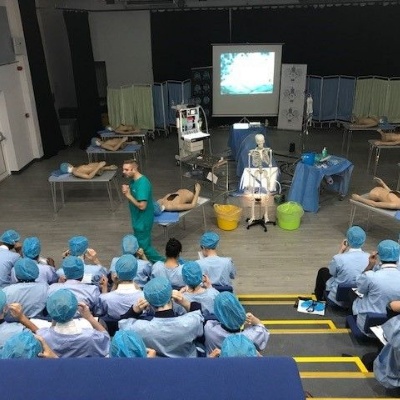 When the opportunity to participate in the ‘Operating Theatre Live’ arose, I was extremely excited. It promised to give a hands on anatomical experience in a clinical environment whilst gaining an understanding of the major organ systems in our bodies.

The day began with a reality shock. We were made aware that only 1 in every 10 students will be successful in their medical application. As an aspiring medical student, this motivated me to be that 10%. Samuel Piri, the organiser of this event, gave us a scenario: tell a mother and father that their daughter has died. How could you convey that in a compassionate and empathetic way? This question taught me that medicine isn’t all about scientific knowledge, it’s also about communication skills and being personable.

After this sombre start, we went on to learn about anaesthetics and how they work. General anaesthetics work in three parts: induction (going to sleep), maintenance (staying asleep), and emergence (waking up). After learning the theory, we had to calculate the dosage of general anaesthetic to give to our patient. We talked Ms  West through the procedure (even though she was a dummy) to develop our communication skills. We were made aware that the slightest rounding up of figures would induce a coma in our patient.

Later on, we were given some knowledge of the anatomy of the brain and eyes. They gave us a pig's head, cut along the medial line and told us to scoop the brains out with our fingers. I had the opportunity to pull off the meninges, which contained all of the blood vessels. A few people were squeamish, but on the whole everyone participated enthusiastically. The best part was when we had to pull the eyeballs out of the pig's head. It was surprisingly hard, and took nearly 15 minutes with three of us snipping at the recti holding the eyeball in place. When it finally popped out, we squashed the eyeball and cut into it. This released a thick, black liquid that oozed onto our hands.

Even more interesting was when we cut into the heart only to find a post-mortem clot. It fell out of the ventricles and onto the table and the floor, which the teachers weren’t too pleased about. We found that our pig had a nodule on his lungs which we were allowed to cut out and hold. I felt like a proper surgeon whilst cutting out this nodule, except it wasn’t as neat as it should have been. Over time, hopefully this will improve (for the sake of the patients).

After the event finished, we were all hungry for lunch. After experiencing body parts we never thought we would have the opportunity of seeing, and smelling smells we wished we never had the opportunity of smelling, we were more prepared for the future in any health career. And we definitely have much stronger stomachs after this enthralling experience.