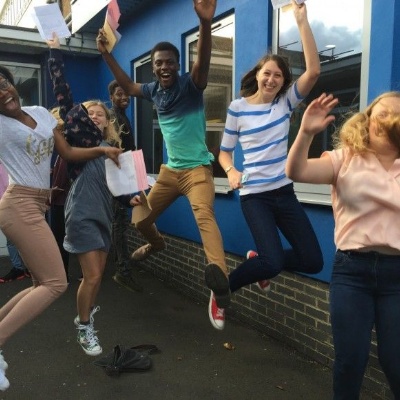 191 Year 11 Bexley Grammar School students have been celebrating an outstanding set of GCSE results which now include the new 9-1 grading for the more challenging, “reformed” English Language, English Literature and mathematics GCSEs. Comparisons cannot reliably be made with previous years because of these reformed qualifications but we should particularly celebrate a remarkable 63% of those English and maths grades which were achieved at 9-7 (equivalent to A*/A), higher than recent years in the old specifications! Across all subjects 58% of grades were A*/A or equivalent. These are tremendous achievements which more than measure up to previous years despite the rigorous new specifications.

3 students gained perfect grades, both straight A* grades and 9s in all 12 of their GCSEs: Corinna Dunzendorfer, Samuel Masters and Ore Ogunbiyi. Lucile Oster, Jaskiran Matharu and Evie Tonks also gained straight 9s in their two English and maths while Shreya Prasai and Lucy Sargent gained 10 straight A* grades in their heritage subjects. 70 students achieved 10 or more A*/A grades, and 99, over half of the cohort achieved 8 or more A*/A grades.

The average point score for the whole year group equates to just below an A grade! All BGS students studied the three separate sciences, two foreign languages, RS and at least one humanities subject alongside the new mathematics, English, English Literature specifications – the majority took twelve GCSEs.

These are remarkable GCSE results from a deliberately stretching, grammar curriculum which has made no concessions to the national trend of narrowing down options in order to play to school league tables. Students and their parents should be proud of these outstanding results and our dedicated staff have been rewarded well for their commitment and belief in our students, particularly in the new specifications in maths and English. Congratulations!