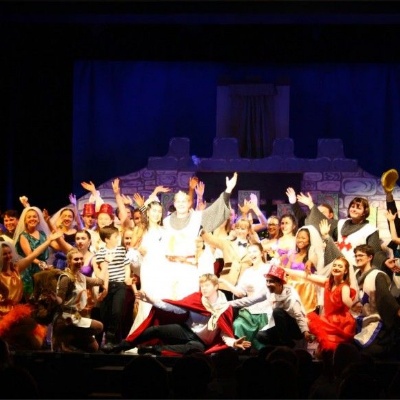 Spamalot is based on the traditional legend of King Arthur and his Knights of the Round Table and is described as being “lovingly ripped off” from the classic film comedy ‘MONTY PYTHON AND THE HOLY GRAIL’. It has a brilliant script, impeccably crafted songs in a wide variety of styles, a large band, great harmonies, physical comedy, large dance numbers and the opportunity to involve a wide range of people. We wanted to ensure we retained the humour of the British institution of Monty Python, alongside making the production relevant and appropriate for our  students, and we thought long and hard about how to incorporate the themes and songs in the show.

The overriding theme of the show is a journey of self-discovery, of friendship, and of courage, things that we all need to remind ourselves of occasionally, and The Schools Edition was created in conjunction with Eric Idle, who wrote the Spamalot script, so it has retained the Python surrealness in all its glory. However, there are a few obvious changes if you know the original, we have added a few references to recent political developments and our local area, and we chose to give Sir Lancelot’s realisation of his sexuality (which is espoused in the song ‘His Name is Lancelot’) a ‘fantasy’ feel, making it a celebration of LGBT culture and 80’s disco with a ‘Pride’ carnival-esque rainbow theme. In a show otherwise set in Medieval Britain, this might be surreal, but it feels weirdly normal in a Python show! The production team has exceeded all expectation and the standard of previous productions, with more costume changes and props required than any show ever before!   Miss Roberts’ choreography has added so much to the show; many people commented on the quality of the dancing this year, and Mr Laing did a superb job with the band, who played the challenging jazz-influenced Broadway score, which covers almost every possible musical style very professionally.

Changes to the global political landscape, in combination with the pressures of being in education whilst the

government are making so many changes in the UK can feel pretty overwhelming at times, but I have to say that working on a show with such wonderful comedy, great dance numbers and feel-good music has been a real pleasure and our Friday rehearsals have sent us all home feeling uplifted, despite the shocking events that have occurred in the last few months. We have loved inhabiting this silly, surreal and wonderful world; it has been a privilege to work with such committed actors and singers, and to see their confidence develop. It is It is amazing to see students develop skills and confidence as they progress through the shows: Matt Talbot for example, is playing the lead role of King Arthur this year after six years of being in the chorus / supporting roles, and we can already see in the younger members of the cast, the potential leads of the future. We can’t wait to get to work on next year’s school musical, which is going to be... SCHOOL OF ROCK!