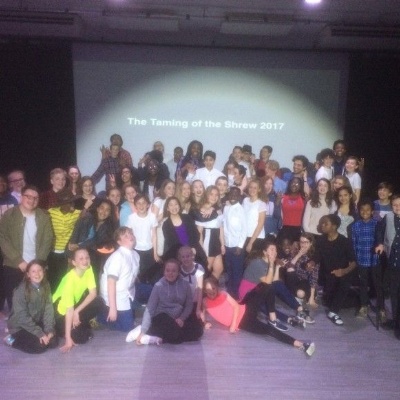 This was the first time I had ever read Shakespeare, let alone performed it yet I, along with all of the cast, really made a connection with the character I played. This was the third drama production I’ve been involved with since starting BGS in September and I would definitely recommend anyone else to get involved in the future.

After several long weeks of effort, hard work, learning lines, attending rehearsals and gathering props, the play was ready to perform. However,  we moved from the Hall to the new Theatre with the date pushed back two weeks as building work was delayed. We only saw the new Performing Arts Centre one day before the play, which put us at a disadvantage when it came to spatial awareness. After a whole day rehearsal before the play though, everything was in order.

On the 9th and 10th May 2017, we performed the play. It went down a hit with the help of cues from the Sixth Form Prefects and Year 10 helpers alongside lighting, sound and special effects from Francesca Handscombe   (Year 9), Alfie Coe (Year 8) and Theo Bourrelly (Year 7).

Although the performances were finished, we were not over yet. On Monday 15th May, "The Taming of the Shrew" went on tour taking to the stage three times more at local primary schools, in the hope of lighting a passion in their hearts.

First of all, we took the long walk to Sherwood Park Primary School for Cast 2 to perform. After the tedious journey back and a quick break, Cast 1 performed for Danson Primary school from the comfort of our own Theatre. When finished, we took the final journey to Hook Lane Primary for the last performance ever… It was a success! Everyone loved it. The questions from the primary schools after the performances demonstrated this.

With our heads held high, we went back to the school. A big shout out to our 3 Drama teachers for all their time, help and support offered to us throughout (Miss Gabriel, Mrs Brazier and Mr Otley). We could never have done it without you guys!

As this was my first junior production I didn’t know what to expect; but during rehearsals, I got to know more people and that made the rehearsals more fun.

The teachers did well in directing the play, even if they did shout at us sometimes (there were 55 excited students after school!). I always had so much fun performing on stage, especially when we performed to my primary school!

I may have not had a main role in the play, but being part of the ensemble was just as enjoyable. Everybody got to do something, which was one of my favourite things about the play. Usually the ensemble would just create physical theatre, but in this play everybody had a few lines each- my favourite was the comical servant scene!

Overall, the play was better than I expected, and I think that any Year 7, 8 or 9s should totally do it next year! I know I will!