Thank you from Japan - A Successful Exchange 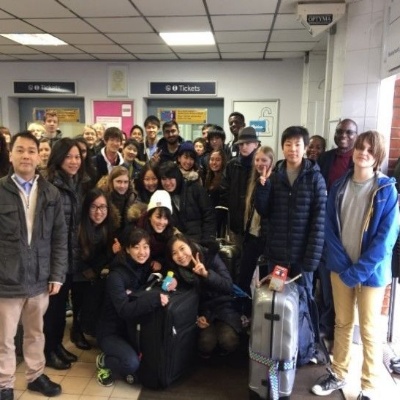 Before I tell you about how I spent a week at Bexley Grammar School (BGS), I want to tell you some reasons why I wanted to take part in this program. First, I wanted to improve my English skills and try to use my English with native English speakers. Second, I’m interested in the lifestyle of the English people. Finally, I wanted to make a lot of friends.

We took 12 hours for our flight and 1 hour 30 minutes from Heathrow airport to Welling, where BGS is located. I was so exhausted and worried about my English, but my host family was waiting for me and they received me very warmly. They took me to a restaurant where we can eat Fish & Chips, the traditional British cooking. It tasted very good!! While eating, my host family asked me about myself and about Japanese culture. I was very nervous and I couldn’t speak English fluently, but they were very kind to me so I could relax.

My host was an IB (International Baccalaureate) student so her classes were very complicated for me. However, I had two classes that I could understand! French class and Biology class. When I could understand the classes I was so happy! We joined in some Japanese classes too. We taught BGS students about Japanese culture in English. It was a little difficult to work because some Japanese words don’t exist in English, so BGS students couldn’t imagine any of the Japanese culture. By the way, we played the Japanese traditional card game “karuta”.

While I stayed there, I found some differences between Japan and Britain. First, almost all students went to school by car (each parent drops off and picks them up). My host family too. In Japan, almost all students use the train or bus for the way to go school. Second, this school was very large. There were many rooms for each subject and students had to move for each class. This is the big difference. In Japan we don’t move for each class and we usually have classes at our homeroom, apart from lessons such as Music and Science. Also, the playground at BGS (grass ground!) was very large. I wanted to do a P.E. class here. Third, at BGS, I felt they gave high priority to the education of a second foreign language. They have many kinds of second foreign language classes, for instance, Japanese, French, Spanish, German, Italian and Chinese. These are common languages, but they have also Latin and Russian classes! In Keio Shonan Fujisawa High School we can learn French, Chinese, German, Spanish and Korean. By the way, they have Psychology classes. This is another difference. Psychology is not a common subject in high school in Japan. However, in England they study it. Then, they have a canteen in the school and all students eat or buy lunch there. In Japan, we bring a lunch box. Finally, there are fixed days such as “Pancake day” (this is a Christian custom and this year was on 2/28), every Friday is “Fish & Chips Day” and “World Book Day”. Actually, I ate a pancake in the morning on 2/28 and I ate Fish & Chips on Friday in the canteen. World Book Day is like Halloween. The BGS students disguised themselves as a character from a book. For example, a Disney character, Harry Potter, a bear etc…

On Saturday, my host family took me shopping and to a French restaurant. I could buy a lot of recommended British goods for my host family!

This exchange program gave me many precious experiences. I could feel many cultural differences through the British life with my host family and my school life at BGS. Also, I achieved my purpose of this program. And in the background there was a lot of help from my host family, the students and teachers of BGS, Mr Gdula and my parents. I want to say thank you very much from the bottom of my heart. And some day I want to see the BGS students again.