Year 7 completed a cross curricular challenge in their DT lessons to design a lab coat with a theme about food waste. This is part of a national competition run by the Bayer Lab, and we look forward to selecting and sending off our favourites in the coming days.

Year 8 took part in the marine engineering workshop that we were very happy to welcome back in person after running it virtually last year.

“We enjoyed the workshop as we learnt a lot of science. We also did loads of experiments and practical’s which were great fun. Our favourite experiment was the one with the Plasticine. This is because I thought it was interesting that the same object with the same mass would sink if it was in a cube, however, if it was made into a boat shape it would float. And you could even add a number of marbles to the object, and it would still float.” 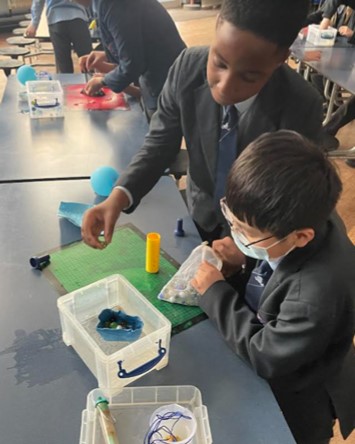 “I really enjoyed the buoyancy workshop, and I'm sure most of the class did as well. We learnt loads of interesting things about why something would sink or float. It really opened up new possible career choices as an engineer or marine engineer that I hadn't thought much of before. I particularly enjoyed the story about Archimedes and his discovery, and the fun practical at the end where we got to build our own boats and see who had built the best (mine almost won).”

Both Key stage 4 and Key Stage 5 teaching groups took part in a competition to broaden the scope of their scientific knowledge and also develop literacy and communication skills in the process. Students were asked to read an article or watch a documentary of their choice and write a review. It has been fascinating to see the areas of science that interest them. A huge variety of science documentaries were enjoyed and the Year 12s now have a much better understanding of how to research and access academic journals and papers. Here are a few of my favourite reviews so far: 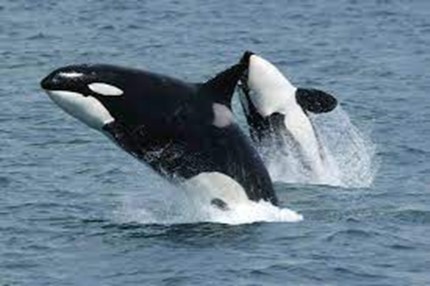 This article discusses the phenomenon of Humpback whales interfering with and possibly attempting to prevent the predation of killer whales on other marine species, some of which were also humpbacks but the majority of which were other cetaceans, pinnipeds and a few species of fish.

The main conclusion the paper aims to draw is that humpback whales will respond to MEKW vocalisations during a hunt and quite will often go to investigate what is happening. The paper hastily brushes away the idea that the humpbacks were participating in the kill as in spite of several eyewitnesses saying they observed the humpbacks hitting the prey (in most cases pinnipeds) with their flippers or flukes, the paper proposes that either they didn't actually make contact with the prey (which was on at least 1 occasion already dead), did make contact, but it was unintentional or were actually attempting to hit the MEKWs as one observer (who saw MEKWs chasing a Steller sea lion) saw the humpback appear to try to slice at the sea lion with its pectoral fins, but it was seemingly too late with each swipe. The paper suggests that this was not in fact the humpback being unable to hit the sea lion but actually slashing at the chasing MEKWs.

I believe that the evidence collected by the paper is reliable as it was made over 62 years by over 50 different observers. However, as the paper concedes early on, it is impossible for us to know how interactions between MEKWs and humpbacks would play out naturally as due to mass whaling, very few living people ever saw a world where the numbers of whales in the oceans weren't depleted, and it is possible that more MEKWs preyed on whales in the past but due to a lack of prey were forced to move to a new food source.

Overall, the paper fails to convincingly portray interspecific altruism as it suggests in the title due to the fact that the evidence presents the idea that humpbacks investigating MEKW vocalisations is due to a fight or flight response (humpbacks are widely considered to be too big and slow to flee so are considered to be a fight species) and not altruism. I believe this as while, when the species being attacked was a humpback (or another cetacean) the humpbacks would vigorously attempt to prevent the kill but when it was a pinniped or other species then the humpbacks were less enthusiastic, often being perceived as more curious than aggressive and hung back on the edge of the action, only occasionally getting involved. Observers also saw male humpbacks escorting females with calves on their migrations being just as protective of calves as the mothers when MEKWs threatened the safety of the calf, but it is theorised that the escorting whales are waiting for the female to enter the breeding season again. However, it is indisputable that humpbacks do seek out and interfere with MEKW hunts so while it may not be complete interspecific altruism, to some extent, they can be seen as helping other organisms with no gain for themselves.

In conclusion, I enjoyed reading this paper and would recommend it to anyone with an interest in zoology, marine biology, animal behaviour, or who just likes whales. This has broadened my understanding of both humpback and killer whales and serves to further our knowledge about cetaceans in order to reduce the belief that they are merely large, unfeeling creatures and cement in the public mentality that these organisms are capable of reasonably complex thought and feeling, and they should be treated as such. 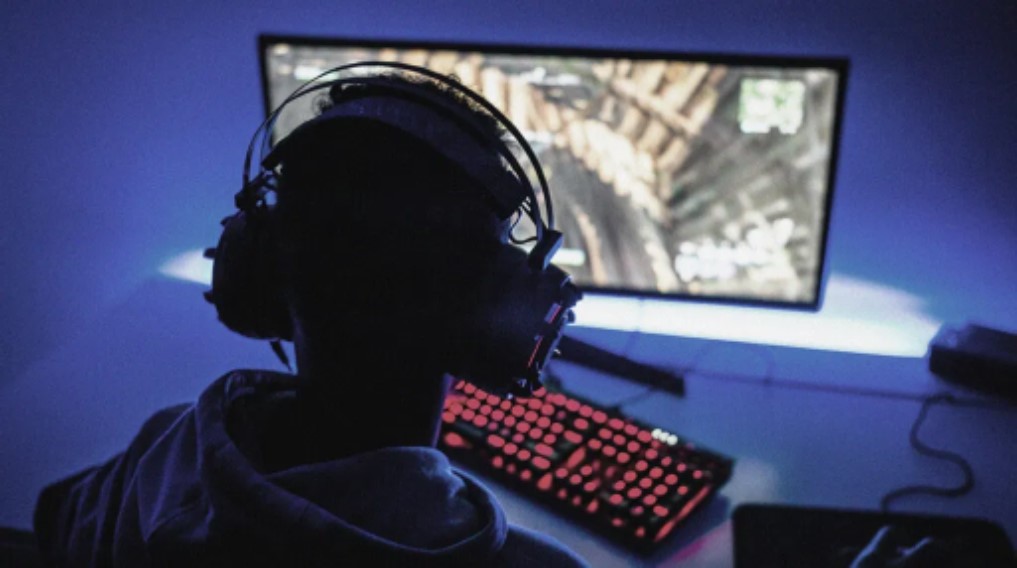 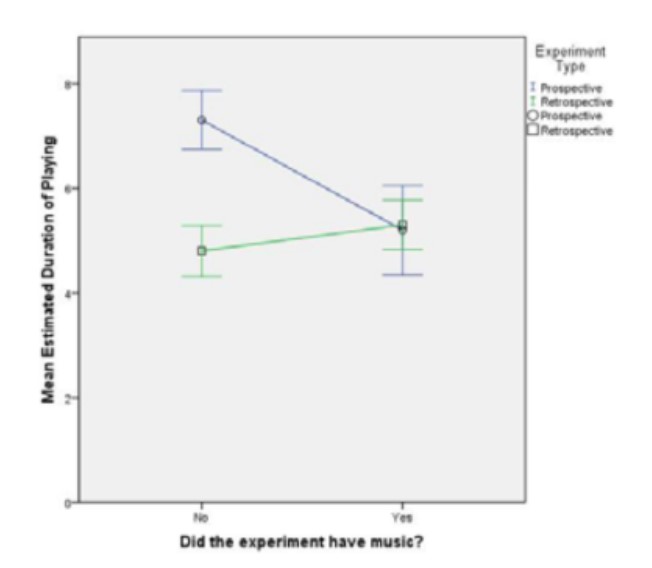 The main evidence presented was the experimental data gathered by the researchers, where a simple maze video game was used with or without music and participants were asked how long they felt they had been playing for. They also filled out a survey on how engaging and immersive they found the game. I think that these results are a good indication of how our time perception is altered when we play video games, however there are too many factors to be able to say for sure.

This article is relevant to me personally because I play a lot of video games, and I think that it is interesting to see how much music affects your immersion in a game. The evidence shown by this article has made me start to use my own music for games that I want to be immersed in instead of listening to their music. This is because the article shows that you are more likely to be immersed if you are listening to music that you enjoy rather than music that you don’t like, which can actually increase the amount of time you feel like you are spending.

A new El Dorado in space? 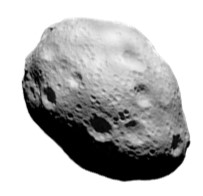 This documentary describes the viability of mining asteroids for precious metals like gold and aluminium.

Our planet is becoming more and more depleted in resources, so people have begun to look for alternatives to gather rare metals: Asteroids.

Even though asteroids appear to simply be rock, denser metals tend to be located nearer to the centre. Many of these asteroids are rich fragments of planets destroyed, and the metals contained on one a few kilometres wide could be more than has been extracted from Earth ever.

The documentary proposes catching asteroids as they get caught in nearby planets’ orbits, giving a reasonable window of a few weeks or months to extract a large amount of material. This would allow for a massive quality of life increase globally as previously expensive resources become significantly cheaper. However, there is a steep development curve and the sector requires an insane amount of funding.

All in all, this documentary proved quite interesting, and I enjoyed watching it. I would recommend it to anyone.

The big event of the week, however, was the Wonderstruck Rocket Show which took place in the hall four times throughout the day. Years 7 - 10 all attended and were wonder struck with all the rockets, explosions and science on display. A huge thank you to the Parents’ Association who raised the funds to pay for this event and also to Mr Elphick for trusting that the fire alarms would not be set off!

Here are a few images, but please see the website where a STEM page is under construction at the moment and videos from the day will be appearing shortly. 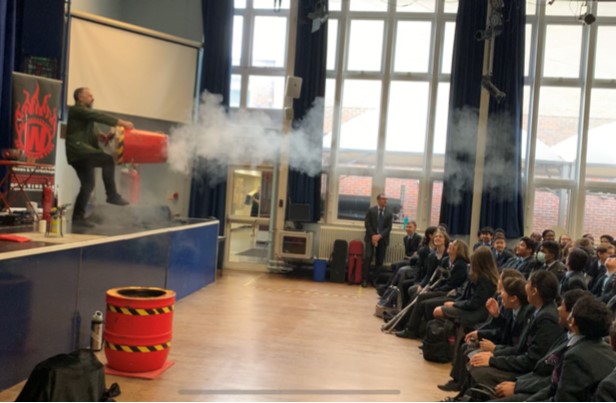 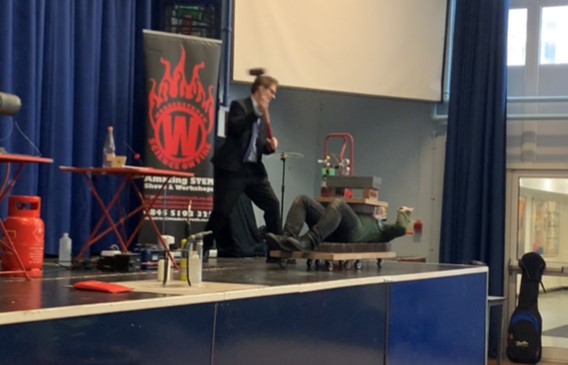 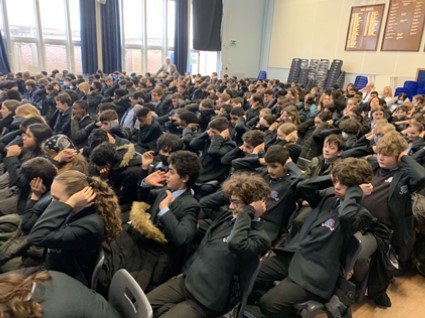 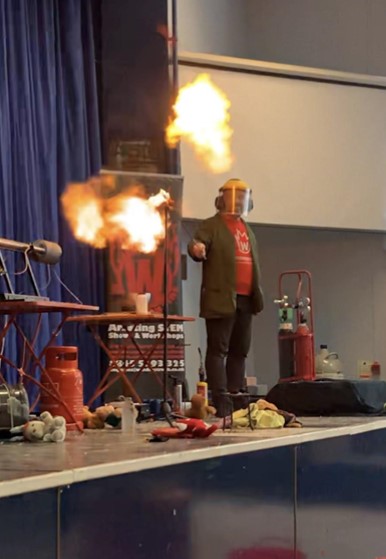 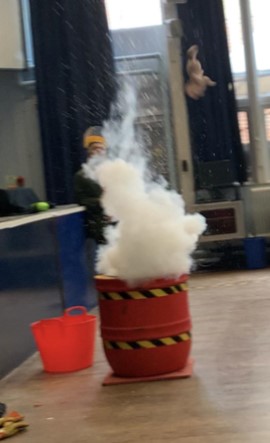