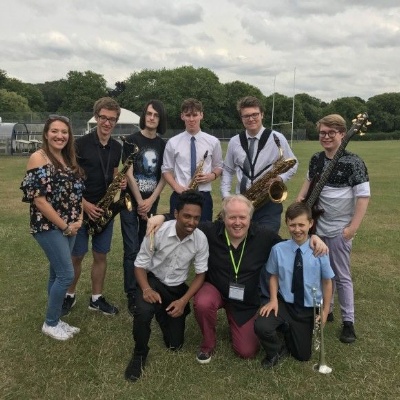 On Friday 8th July 2016 Bexley Improv Group performed at the National Festival of Music for Youth finals in Birmingham. Following our performance and recommendation from international jazz pianist Zoe Rahman, we were delighted to be awarded a National Partnership Scheme with the Leeds College of Music. This is the highest musical award that the school has ever won.

Back in November we received this award at the Royal Albert Hall and got to meet our mentor from the Leeds College of Music, Sebastiaan de Krom. On Friday 30th June 2017 (exactly 51 weeks after we performed in Birmingham) the current band (Luke Montgomery, Josh Masters, George Ross, James Warren, Aaron Harrex, Matt Hamilton, Emma Abbate and Teshan Karunasekera) welcomed Seb for a highly anticipated session, lasting from 10.30 am - 3.30 pm in MU1.

Seb asked us to play several pieces in our current repertoire to him and then, using his wealth of experience as a professional jazz drummer (including playing with jazz legend Herbie Hancock) and director of the National Youth Jazz Orchestra Academy Big Band, fine-tuned each piece. He discussed with us the delicacy of the blending of the different frontline instruments and really made us think about the articulation and phrasing of every phrase, even if there were no markings on the leadsheet. After looking at this together as a band we could immediately hear how much tighter and slicker we sounded.

One of the main things Seb focussed on for the rhythm section in particular was the concept of groove. This is something that Zoe Rahman picked up on at the National finals in Birmingham so we were very glad to hear that Seb was going to try and improve our groove. A lot of time was spent getting the rhythm section to completely lock in with each other and start to change their comping and listen to each other intently. Seb, being a professional drummer, was not afraid to join in on the drums and show us the

potential of the rhythm section to lead the group and establish a groove. It would suffice to say that every time Seb drummed the entire band was blown away by his playing! The session was incredibly enjoyable, but it was also incredibly intense! At the end of the session Seb gave us a very motivational talk filled with advice for pursuing our musical careers. When he asked us if we had any questions we were unable to respond as we were so exhausted!

As a band we are so grateful to Seb de Krom for his session and we hope that we can use his advice as we progress in our musical careers. We are also very grateful to Mr Laing, who not only organised this session, but is also the reason we won the partnership in the first place. If you would like to hear the fruits of this session then tickets are available for the school's Jazz Evening on Tuesday 11th July in which Bexley Improv Group will be performing several pieces. Click Here to purchase your tickets.